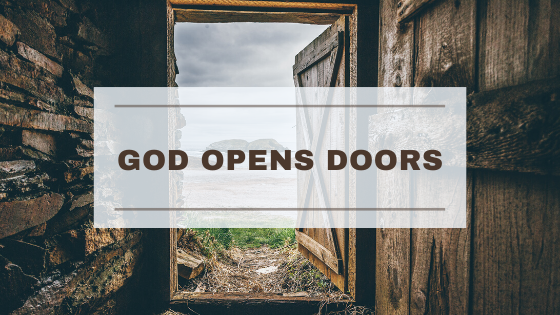 For a great door and effectual is opened unto me, and there are many adversaries.
1 Corinthians 16:9 KJV

I would like to read that same verse of scripture from the Amplified Bible. If you don’t have an Amplified Bible you should get one to use in your studying along with your normal Bible reading.

The Amplified Bible expounds on scriptures, and as far as I have seen in almost all cases, it is on the spot and very accurate and is somewhat a commentary as you read along through the scriptures. 1st Corinthians 16:9 in the amplified version of the Bible says

A wide door for effective service has opened to me, and there are many adversaries.
1 Corinthians 16:9 AMP (Commentary removed)

The Seven Churches of Asia

I know thy works: behold, I have set before thee an open door, and no man can shut it: for thou hast a little strength, and hast kept my word, and hast not denied my name.
Revelation 3:8 KJV

This is all that God needs. It’s just whatever you have, no matter how small it is. No matter how much strength you have left, he said you’ve got a little strength and you’ve kept my word and have not denied my name. Praise God!

So we read, “a great and effectual door is opened unto me.” And then the Word of the Lord says to the church, “I have opened, I have set before thee an open door and no man can shut it.”

Everybody has been waiting on open doors that I was talking to Pastor Raab this week and I said: “You know, I’m just really feeling something in my spirit about doors that are going to be open.” I see us starting to be together again and opening for public services. Even in a limited way, I see a sign from the open door.

I see throughout the Word of God when doors were opened, miracles happened, and great and mighty moves of God happened in individual lives. For the Heroes of Faith, for generations, for four complete nations, and for the world there have been times that a door would open and it seemed like all of Hell could not stop what God was doing and I want to tell you all of Hell will not stop what God is doing right now in our time.

Noah and the closing up of the ark

Thinking back to the time of Noah, wickedness was on the earth, but Noah found grace in the eyes of the Lord. For a while, it was necessary even for Noah, for God to shut the door. The Bible said God closed him in.

I wonder in the whole scheme of things, in the worldwide Church of Jesus Christ, if there has been a reason for us to gather awareness so that we can appreciate what we’ve always had in our lives. We’ve known the freedom of the church doors being opened but we have also taken it for granted.

Until it’s not there we don’t have the awareness as we have now. But praise God when He closed the door to the ark there was plenty of time for Noah and all of his family to think about it. And I want you to know I’ve been thinking about it, and I know that as this pandemic begins to wind to an end, there’s going to be an open door like we’ve never had before!

In my heart, there is deep appreciation. Now that I’ve had past open doors, there is also repentance in my heart because I didn’t take advantage of that open door that was there the whole time.

God then told Noah, the door is open, and for him to go be fruitful and
multiply. Once that door was closed up, it was closed up on people that had found grace in God’s sight, especially Noah.

And because Noah found grace in the sight of the Lord, his whole family was affected. When the door was finally open they had the same benefits that Noah had. After the doors opened, the first thing that Noah did was build an altar, and then they began to be fruitful and multiply.

The doors are being opened

As we read in the New Testament, Paul said there was an open door in the city of Troas and in Macedonia. He said I must go, there is a door opened before me.

We must Praise God for the lessons that have been learned during the time of closed doors. In these times it is amazing that we have so many new and exciting ways of sharing the Word of God online and around the world. We are finding new ways to preach the Gospel and to reach souls around the globe. Let’s thank God for open doors and open hearts! Amen.